They could’ve been twins. That’s what Jessi Earnst’s mom Cheryl, thought. It seems that her daughter had traveled halfway around the world to meet her doppelganger, an athlete from Rhode Island with the same name, same birthday (10 October), similar appearance, both with Down syndrome and both competing on a world stage in one of the most momentous occasions of their lives: the 2003 Special Olympics World Summer Games in Dublin, Ireland.

“Her name was the same as mine and her birthday was the same, October the 10th,” enthused Jessi, who will turn 19 later in the fall. In fact, they both competed in soccer, Jessi on the Women’s 5-A-Side and the other Jesse, Jesse Lanterman, 24, playing on the Women’s 11-A-Side team.

Held 21-19 June, the 2003 Special Olympics World Games was the largest sporting event to take place in the world in 2003. To say that these events can be life-changing isn’t an exaggeration, and when an entire family is involved, you indeed have something special. The Earnsts are one such example.

Located approximately 20 miles east of Houston, Bayside, Texas, is home to the Earnsts, four of whom made the trek to the Emerald Isle for the Games. Following the lead of their multi-sport-playing daughter Jessi, the Earnst’s have been involved in Special Olympics for more than a decade. Joining her in Ireland was her father Mike, 51, Team USA’s 11-A-Side Unified Sports® Men’s Soccer Coach, 15-year-old brother Mikey, who played on his dad’s team and their mother Cheryl, 47, a registered nurse (the couple is divorced; stepmother Jennifer, 45, is a fan too), who cheered them on.

“It was awesome, pretty much,” enthused Mikey, who turned 15 the day I was talking to him at his home in Baytown. “It was pretty cool.”

It’s actually pretty awesome that Mikey would use that adjective to describe his tour of duty, as he had a rough go of it over there. Listen to this itinerary. While throwing the football around he stumbled a down a small embankment … and got a stick jammed up his leg above a knee for his troubles. A quick trip to the emergency room and he was patched up – he wouldn’t let them put stitches on the cut because then he wouldn’t have been able to play. Maybe it was an omen, because his team got trounced, not winning a single game, and to boot, he was among the youngest and smallest players on the field. Things got so bad that the team scored the winning goal for the other team!. But there was something a little more to this than mere sport, and he was psyched to be there.

“I didn’t think it would be that big a deal but it was. [You] feel honored to be there. You couldn’t tell who were athletes and who were partners,” he said, unintentionally giving Special Olympics the greatest compliment he could.. But those two are just half he equation for this family. Though father Mike and mother Cheryl are divorced, they have remained steadfast supporters of Special Olympics. A former high school football and basketball player and father of six (two with Cheryl), Mike was always involved with his children in their extra-curricular, so when Jessi started hitting the softball and soccer fields for Special Olympics, he was right there for her. “When she started in it, I started helping out,” or, as Mike put another way, “After a while, I guess they saw that they weren’t gonna get rid of me, so they might as well put me to work.” Mike has since coached Jessi in many sports.

As mentioned, though Mike’s team had quite a tough time of it and his son ended up in a brace to hold the bandages on his leg, positives far outweighed the negatives. 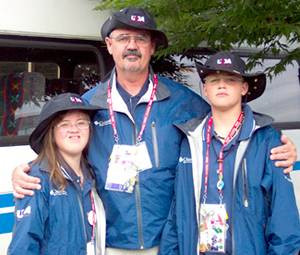 “I was watching them and just thinking back to where we had started, and you know gauging their improvements. They had come a long way. It was great, it really was,” he added.

Cheryl Earnst is about as big a fan of Special Olympics that there is in Texas. She constantly attends Jessi’s meets and helps facilitate them; like Mike, she’s involved with all of her daughter’s sports. The experience at World Games was awe-inspiring to her.

“I can’t explain to other people how elite it was, how these are my kids from Texas over here playing for the United States. Sitting side-by-side on the bus with all these athletes and trading pins with them,” despite the language differences. “It was something else.”

It certainly was, and both kids will take this incredible experience back to Sterling High School – where they both attend – and share the story with their friends, humanizing this mission and breaking stereotypes. Jessi’s experience with Special Olympics has giving her the confidence to participate in Sterling’s band practices, where she’ll be learning the register come fall.

A fan of the arts, Jessi overcame her fear of flying by indulging in a favorite pastime: film. “We got to see two movies!” she exclaimed, helping make those 35,000 feet jitters float away. And along with meeting the other Jesse and being with her family in a strange new land,, Jessi exclaimed, “I liked dancing with everybody at Opening Ceremonies.” And it would seem that these Games may have been more special than anyone could realize.

“The weather, they said it was almost like a miracle, because it was predicted rain every day,” Cheryl said. “It would cloud up and it might sprinkle, and the rest of the day it never rained and the people who lived there told us that this never happened before. The weather was awesome. Believe it or not the kids left on the 30th and he next day it started pouring and it never stopped.”

Sounds like Special Olympics has the most important fan of all.

Under the best circumstances, divorce is difficult, and it can be even more so for families with special needs. What qualifies as "special needs? What if spouses can't agree on the standard of care required? What essential elements should be included in your parenting plan? What government programs and resources are there to help? There are many resources and programs available to families in transition with special needs. Our esteemed guests, Mary Anne Ehlert, CFP®, President and Founder of Protected Tomorrows and Georgia Lord, Family Law Attorney specializing in non-traditional divorce, will share their insights and expertise, so you can better understand what you might need, what is available to you, who to ask and where you can go for help.

– Attendee Comment – “Mary Anne was extremely knowledgeable and inspiring to listen to. She laid out a doable plan that I’m ready to tackle. She made saving for the future seem not as scary as I’ve always felt it to be.”

Are you stressed about how to care for yourself as well as your family during COVID-19? While you are trying to work from home, how are you dealing with your children being around? And if your child has special needs, are you especially stressed by the lockdown and change in routine? A distinguished expert in the wellness industry, Shay Beider, founder of Integrative Touch for Kids, will help you stay at the forefront of the industry's leading edge methods for caring for yourself right now. Prepare for the challenges facing parents today by maintaining core wellness without getting derailed from experiencing unknown and unexpected changes.